I have tagged and released the scikit-learn 0.14 release yesterday evening, after more than 6 months of heavy development from the team. I would like to give a quick overview of the highlights of this release in terms of features but also in term of performance. Indeed, the scikit-learn developers believe that performance matters and strive to be fast and efficient on fairly datasets.

I will show in this article on a couple of benchmarks that we have significant performance improvement and are competitive with the faster libraries such as the proprietary WiseRF.

Most of the new features of the upcoming release have been mentionned more in details on Andy Mueller’s blog. I am just giving a quick list here for completness (see also the full list of changes):

Many part of the codebase got speed-ups, with a focus on making scikit-learn more scalable for bigger data.

We are faster: lies, damn lies and benchmarks

“There are three kinds of lies: lies, damned lies and statistics.” —

Mark Twain’s Own Autobiography: The Chapters from the North American Review

I claim we have gotten faster at certain things. Other libraries, such as WiseRf, have performance claims compared to us. It turns out that benching statistical learning code is very hard, because speed depends a lot on the properties of the data.

A good example of interplay between properties of the data and computational speed is the nearest neighbor search. In general, finding the nearest neighbor to a point out of n other points will cost you n operations, as you have to compute the distance to each of these points. However, building a tree-like data structure ahead of time can make this query cost only log n. If these points are in 1D, ie simple scalars, this would be achieve by sorting them. In higher dimensions that can be achieved by building a KDTree, made of planes dividing the space in half-spaces, or a BallTree, made of nested balls. 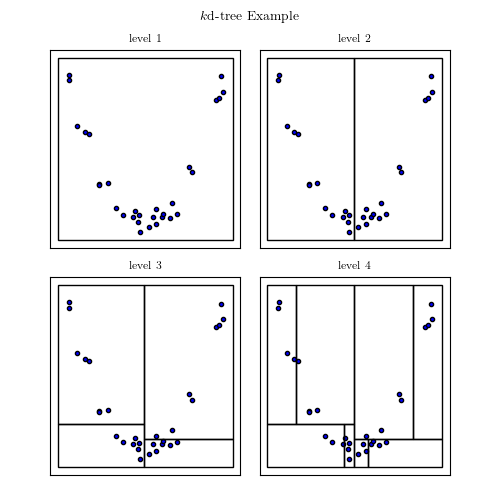 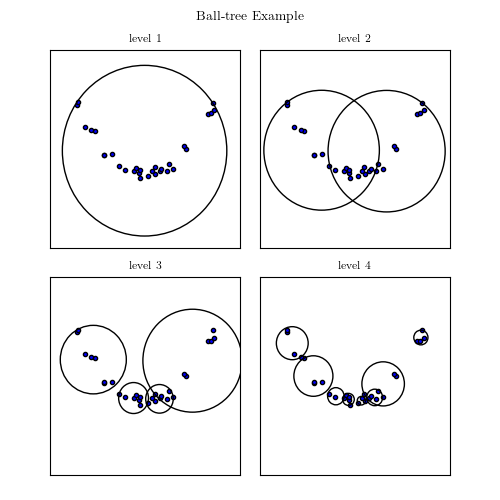 Popular wisdom in machine learning is that in high dimensions, BallTrees scale better than KDTrees. This is explained by the fact that as the dimensionality grows, the number of planes required to break up the space grows too. On the contrary, if the data has structure, BallTrees can more efficiently cover this structure. I have benched scikit-learn’s KDTree and BallTree, as well as scipy’s KDTree, which employs a simpler tree-building strategy, on a variety of datasets, both real-life and artificial. Below if a summary plot giving relative performance of neighbor search n is the number of data points, and p the dimensionality.

We can see that no approach win on all counts. That said, it came to a surprise to me to see that even in high dimension, scikit-learn’s KDTree outperformed the BallTrees. This is explained because these datasets do not display a heavily-structured low ambient dimension. On highly-structured synthetic data, the benefit of BallTree can clearly stand out, as shown by Jake here. However, on most dataset people encounter, it seems that this is not the case. Note also that scikit-learn’s KDTree tend to scale better in high dimension than scipy’s. This is due to the more elaborate choice of cutting planes. Note that it also has a cost, and may backfire, as on some datasets scikit-learn is slower than scipy.

Overall, the new KDTree in scikit-learn seem to be giving an excellent compromise. Congratulations Jake!

DBSCAN is faster with trees

DBSCAN is a clustering algorithm that relies heavily on the local neighborhood structure. The implementation in scikit-learn 0.13 computed the complete n by n matrix of distance between observations, which means that if you had a lot of data, you would blow your memory. In the 0.14 release, DBSCAN uses the BallTree, and as a result scales to much larger datasets and brings speed benefits. Here is a comparison between 0.13 and 0.14 implementations (I couldn’t put data as large as I wanted because the 0.13 code would blow):

Gilles Louppe has made the random forests significantly faster in the 0.14 release. Let us bench them in comparison with WiseIO’s WiseRf, a proprietary package that only does random forest and for which the main selling point is that it is significantly than scikit-learn. However, let us also bench ExtraTrees, a tree-based model that is very similar to random forests, but that in our experience can be implemented a bit faster, and tends to work better.

So we see that on a mid-sized dataset, scikit-learn is faster than WiseRF, and ExtraTrees is twice as fast as RandomForest, for better results.

On a big dataset, WiseRF takes the lead, but not by a large factor.

Both scikit-learn and WiseRF can use several CPUs. However, the Python parallel execution model via multiple processes has an overhead in term of computing time and of memory usage. The internals of WiseRF are coded in C++, and thus it is not limited by this overhead. Also, because of the memory duplication with multiples processes in scikit-learn, I could not run it on MNIST with 2 jobs. Next release will address these issues, partly by using memmapped arrays to share memory between processes.

We make good use of funding: the Paris sprint

A couple of weeks ago, we had a coding sprint in Paris. We were able to bring in a lot of core developers from all over Europe thanks to our sponsors: FNRS, AFPy, Telecom Paristech, and Saint-Gobain Recherche. The total budget, including accommodation and travel, was a couple thousand euros, thanks to Telecom Paristech and tinyclues helping us with accommodation and hosting the sprint.

The productivity of such a sprint is huge, both because we get together and work efficiently, but also because we get back home and keep working (I have been sleep deprived because of late-night hacking ever since the sprint). As an illustration, here is the diagram of commits as can be seen on Github. The huge spike correspond to the second international sprint: Paris 2013.

We now have a “donate” button on the website. I can assure you that your donations are well spent and turned into code.